There is only one word to describe a great meal: sublime. More than just wowing your palate, it should please all your five senses. In addition, the food should stay with you in memory, rather than simply being consumed. That’s what Paradise Dynasty offers: a luxurious dining experience that will leave you in awe, and will stay with you for days, or maybe even weeks.

A concept that originated in Singapore in 2010, Paradise Dynasty now has branches in China, Taiwan, Hong Kong, Malaysia, Japan, and Indonesia. Their branch at S Maison Conrad is their first in the Philippines. Confident that the food will draw in people, Paradise Group CEO Eldwin Chua found its upmarket location, which offers floor-to-ceiling views of Manila Bay, perfect for the restaurant.

Paradise Dynasty has a spacious dining area that features upscale and modern Chinese elements. It has a total seating capacity of 123, enough to hold big groups of families and friends, but not enough to prevent queues from forming during peak hours.

While the high-end finishes would make you expect exorbitant prices, the food in Paradise Dynasty is actually reasonably priced. This is part of their CEO’s vision: to provide a quality, consistent, and affordable dining experience.

Inspired by French macarons, these dainty soup dumplings are meticulously prepared down to the smallest details. For instance, getting the color right every time requires stringent quality control measures that only Paradise Dynasty can execute. The vividly colored dumpling skin is tinted using natural pigments, such as spinach, squid ink, carrot juice, and beet root.

Aside from having intense flavors that will leave you wanting more, Paradise Dynasty’s Xiao Long Bao also got technical details right: the springy dumpling skin isn’t too thin or too thick, enough to have substance but not so thin that it risks bursting. 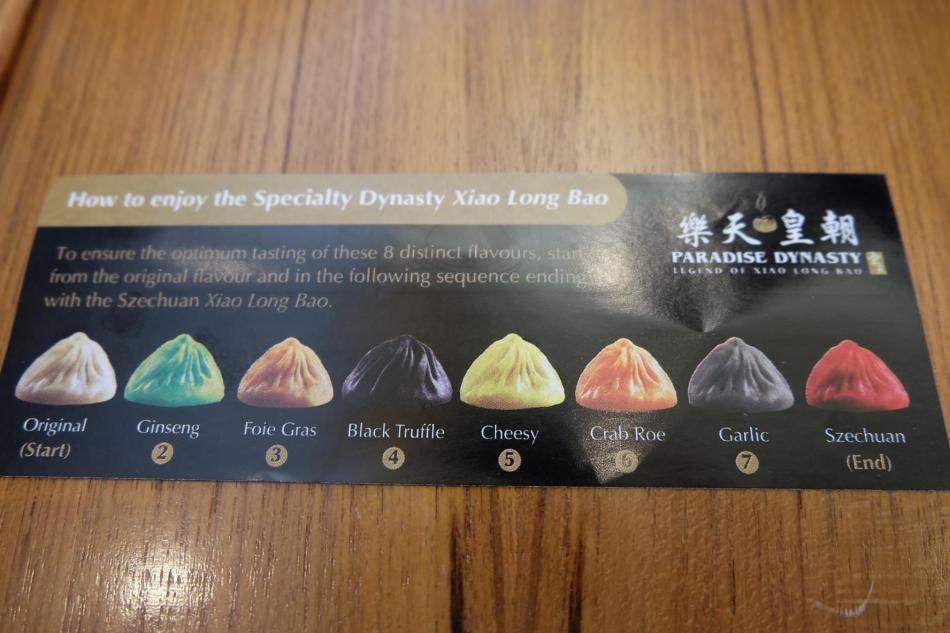 To fully savor the flavors of these soup dumplings, refrain from eating them with vinegar and ginger. You must also eat them in a specific clockwise sequence, starting from the bright green Ginseng XLB then ending with the hot, peppery Szechuan XLB.

While the Black Truffle and Foie Gras variants were obvious crowd-pleasers, the Cheesy Xiao Long Bao was a pleasant surprise. Its salty cheesy filling would definitely be a hit with kids.

Despite the gimmicks, our favorite remains to be the original. Bursting with hot and savory broth that’s enough to fill your entire spoon, the original soup dumpling rivals, and perhaps even beats Din Tai Fung’s version.

Aside from soup dumplings, Paradise Dynasty’s menu includes pan-fried dumplings, vegetable buns, and other steamed delights. One of their most praised offerings is the Radish Pastry, a light, flaky, savory pastry filled with very thin radish slivers.

While Paradise Dynasty takes pride in offering world-class dimsum, their hot dishes are also impressive. Take, for instance, this Shredded Pork in Black Bean sauce. While the flavor of the black bean sauce is a bit strong, it’s tempered by the light and chewy Chinese crepes.

A hallmark of a good fried dish is if it doesn’t require any sauce–and that’s exactly what you get with these Deep Fried Garlic Pork Ribs. Lightly breaded and heavily seasoned with garlic and a mix of Chinese spices, this dish is a must-order at Paradise Dynasty. Eat this wth their Egg Fried Rice, which enhances the flavor of the meat.

To balance out our meal, we had this stir-fried spinach on the side. The spinach was a good vehicle for the light, garlicky sauce.

Surprisingly, Paradise Dynasty also offers a range of Szechuan dishes. We always make it a point to order Szechuan dishes whenever we can, because this is a cuisine we haven’t yet explored. This poached chicken dish had a lot of potential, except that it was too bony to be enjoyable.

A better option is this Szechuan Crispy Chicken. Don’t worry, you don’t have to eat all the chilis on the platter. You can simply pick out the chicken and enjoy. They remind me of Chicken poppers, except they’re seasoned with a cumin and other spices. This was hands down the favorite dish on our table.

Overall, our entire experience at Paradise Dynasty was superb. Even the servers and the manager deserve a special mention for being knowledgeable about the menu and for being highly attentive to our requests. The dishes were reasonably priced and delivered big on flavor. I’d highly recommend it to those who’d like to see a new take on Chinese food.